An American in Dublin

In April I was attending a trade conference in Dublin. One of my colleagues suggested that I contact her brother in law, Keith, and see if we couldn’t arrange a time to get together for a pint or two of the “black stuff”. In the interest of Irish-American relations I agreed. It was the very least that I could do.

My knowledge of what constituted a “proper pint” of Guinness had been greatly informed since Katheriona had joined my fledgling company. A native of Ireland, Katheriona now lives near me in Maryland.

Although we had not shared pints in Maryland, (she preferred wine since pints of Guinness in the US were in her words, “shite”), her opinions on the subject were pronounced. Some places in Dublin poured a “proper pint” and others didn’t. Explanations about the difference were complex to say the least. I guess you either know or you don't.

Another of my colleagues, Tanya, lives in Ireland. For the last 2 years she has joined me for the above referenced trade shows and has further added to my understanding of what makes for a “proper pint” of Ireland’s most iconic brand. This is not a casual subject in Ireland!

In years past, consumption of the Stout was said to confer strength and even intelligence upon the consumer. During pregnancy Tanya’s mother-in-law would occasionally send her husband to the local, to fetch a pint. It often took him as much as an hour to retrieve the pint even though the pub was just down the street. 7 healthy children were ample proof of the benefits related to the high levels of iron (urban myth) in Guinness.

My first lesson in Guinness theology came on my honeymoon a little over 33 years ago. My new bride, Beth, and I decided that we would spend our honeymoon “touring” Ireland and the British Isles. We arrived at Shannon Airport a little after lunch and made the short drive to Dromoland Castle. Unable to check in due to the early hour we headed to Dirty Nelly’s near the Bunratty Folk Park.

We had flown overnight which meant that we were a little wobbly and disoriented when we pulled into Bunratty but we needed something to eat. After Beth ordered a Smithwicks, I had the green light to order the beer that was legendary in my hometown of Boston, a Guinness……in Ireland no less.

Growing up in a largely Irish Catholic town, Guinness was the stuff of legend. It was too good, too special, too unique and too perfect to describe. Since a Guinness in Ireland was but a dream for most Irish-American’s, its reputation bordered on mystical. It was the perfect beverage.

Standing at the bar in Dirty Nelly’s (my Irish friends are appalled that my first pint was in such a tourist trap), the pints were casually yet properly presented. I was excited beyond words yet had the presence of mind to serve my new bride first. 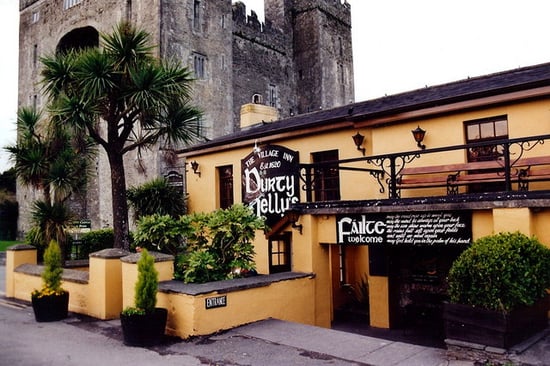 Standing at the bar I grabbed the Smithwicks with my left hand and started to turn in order  to hand it to Beth. Simultaneously I was reaching with my right hand to grab the Guinness. I was so close, I wasn’t going to let it get away. I couldn’t wait.

Apparently, I had to wait a little longer. Despite my haste to be a good husband and get the Smithwick’s to Beth, my wait had to wait.

The right forearm that was attached to my right hand which was attached to a Guinness tried to move. It was quickly immobilized by the oversized paw of the bar tender. He explained in a paternal and very firm tone that “son, it needs to settle”. Abject humiliation. What an insult for someone that should have known better.

This was my first lesson in Guinness Etiquette. It left a mark.

In between my first “real Guinness” and this spring I had learned a lot about the proper pour, the importance of nitrogen and clean taps and lines. My visit with Keith in April took Guinness reverence and orthodoxy to a new level.

Despite the fact that I had invited Keith to join me, I was not allowed to pay for a pint until he had to go to the bathroom. Despite my intervention and pleading with the bartenders I had trouble getting the barman to take my credit card. Keith clearly was using home field advantage to his advantage.

So after 2, OK so maybe 5 pints of Guinness, Keith mentioned that I had a “gravity” glass. I had no idea what he was talking about. I had suffered the embarrassing attempt at trying to drink a Guinness before it had settled decades ago. I don’t have a big ego, but that one hurt. I had studiously listened to what made for a “proper pint” over the years. There were several actions and considerations that went into serving said pint.

I was stumped by the mention of the glass. 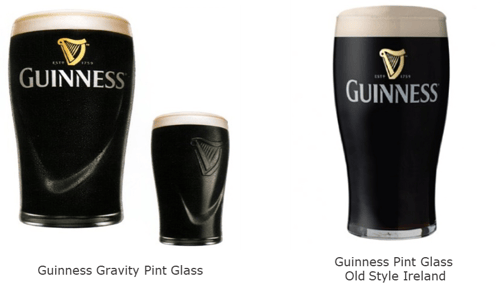 Briefly, the hierarchy according to my friend Keith:

Keith did go on to note that if you have had 8 or more pints, the type of glass in which they are served is probably irrelevant. You likely will be too “tired” to notice or care. I would argue that discussions of this sort often become more interesting and animated after 8 pints, assuming that you are not “asleep” by then.

There is a great deal of etiquette involved with a pint of Guinness in Ireland. Your palette might not be sufficiently informed to be able to determine whether the lines and taps are clean or that the Nitrogen level is adequate. You can however be alert to the manner in which your pint is poured and respond accordingly.

If you are visiting Ireland and find yourself ‘on the lash’, there is no excuse for drinking from a sub-par glass. You’re in Ireland for crying out loud. Drink your Guinness with dignity!

Contact us and we can help you ensure a proper pint or 2 while enjoying a memorable trip to the Old Sod.